Have you decided what to be for Halloween this year?

Um, you might want to think about it, it’s today……

I realize I’m a bit late on this one, so let’s pretend it’s more of a reveal, like “Hey, everyone, look how good looking I am!”

I’m the first to admit that I’m not a fan. Not of the dressing up part, because besides all the candy that’s the only good part. I hate being scared, I hate being out past dark, and I really hate being super uncomfortable having to be around all the girls showing off every inch of skin and leaving nothing to the imagination in sub-par weather in the most ridiculous costumes of all time. I’m lookin at you “sexy ebola virus” Ah college, how I don’t miss you.

Since I’m an adult now and everything I won’t have to worry about the sea of flesh parading itself around the various Halloween parties this year. (How are you not cold!!)

Of course we can’t forget that my purse strings are tighter than trying to fit into spandex two sizes too small, so I’m all about thrifting.

And because I force JB to do cute things with me against his will with the promise of pumpkin treats and doing his laundry, he placates me sometimes. He did shoot down several of my ideas before agreeing to this couple’s costume. Ideas that in my mind were golden with Danny and Sandy from Grease, Tweedle Dee and Tweedle Dum, and Fred and Wilma Flintstone among them.

Honestly though, I think we settled on the best possible idea. Forrest Gump and Jenny. Not only is it one of my favorite movies ever, but seeing JB in tiny red running shorts is too awesome to pass up.

So how did we get our costumes together? Thrift Shop, duh! “Saving my money and I’m happy it’s a bargain” Macklemore anyone?

I dragged JB to Goodwill with me first where I usually have tons of luck finding exactly what I went in looking for.

I’ll be honest, it took me 4 trips to Goodwill to finally find the dress that was perfect for my costume, so I suggest starting a bit early if you’re a single-track mind like me and won’t change their vision of what they want to look like.

JB was easy, all he needed was a white shirt and tiny red shorts. Plus a beard and wig duo we got from Party City. Easy, Peasy, he’s done.

Sure he could have bought one to be have exact replicas but those are so boring (and expensive!) However, this is the look we were going for…

So the beard cost quite a bit at $22, but the rest clocked in at $2 so not horrible. He already had the Harvard hat, red shorts, and tall white socks.

Mine was a bit more challenging. Now obviously Jenny goes through, like a billion looks so lots to choose from. I went for the classic hippie look, that way even without JB I looked dressed up. Plus who doesn’t want to be a hippie sometimes.

So I wanted a white lace and/or flowy dress, fringe vest, and flower crown. I was already planning on wearing my tall brown boots so that was all set.

JB actually bought me a flower crown (3) at Party City for $5 but I wanted to DIY it to make it cuter. Michaels was having a sale on Fall flowers so I got $3 worth of flowers plus $2 flower tape. Had JB not gotten me the flower crown which I used as a base, this project would have been a total of $5.

The vest is actually a man’s large brown shirt with the picture of a whooly mammoth on the front which I chopped up and turned inside out and I am so in love with how it turned out! Yay me!

So there ya have it folks. Pretty cheap and extremely easy DIY Halloween costumes!

I’m becoming more of a Halloween person as I get older, I mean the whole couples costume thing is pretty fun. I would have loved to do the whole DIY girl group thing back in the day but not having friends kinda puts a damper on that kinda thing. Kidding, I wasn’t as cool in college as I am now. Obvi.

And one more photo of me becasue getting JB to take as many photos as I want is rare. Yay Holidays!

And I’m a bit conceited about the whole look…I mean, I look good 😉 And that flower crown, watch out world, you’ve got another flower child on the loose!

Are you dressing up for Halloween this year?

What’s been your best DIY costume ever? 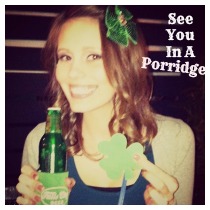